Many companies are turning to nearshoring as a solution to the problems of hyper-globalized and vulnerable production chains. But for unlocking this new call of globalization, digital transformation is key for making it all work.

As the world recovers from the shock of experiencing both the pandemic and the ensuing lockdown, several narratives emerge as people try to make sense of it all. There are many different perspectives, including those that seek to point blame for the coronavirus and its rapid spread, those that point out the flaws in our current healthcare and governmental systems, and more. But instead of advancing an agenda or pointing fingers, it might be better to view the problem in a different light: as a basis for positive change in economic globalization.

In some respects, the pandemic has accelerated movements that were already underway — digital transformation, for example. Overnight, millions of workers began working from home and sharp rises in online shopping had companies scrambling to update their networks, improve processes, increase their online presence, and develop their social channels in hopes of creating customer value.

Another pre-coronavirus trend that has gained ground during the pandemic is de-globalization. Already visible with movements like sustainability and supply chain visibility in the fashion industry, de-globalization got a significant boost with the onset of the coronavirus.

Globalization was already shifting in a different direction

The pandemic has exposed vulnerabilities in the “globalized” economy. These weaknesses were already there, ready to be exacerbated by a “perfect storm” of events. That perfect storm consists of 1) the pandemic 2) political tensions 3) an over-reliance on complex, international supply chains. All three elements of this storm are linked to China, which is now considered the world’s largest economy. 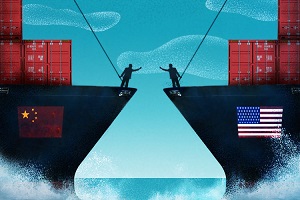 The snarled supply chains and barriers to trade and travel have done much to highlight the flaws of a hyper-globalized economy.  Manufacturing has been hit hard. With factories in China shut down because they are non-essential, supply chains have come to a halt. Apple, Toyota, and Honda are just a few of the brands that have taken a hit and have closed factories or stopped production.

But it is not just the well-known names that have experienced the negative effects of hyper-globalization. Small and medium-sized companies have also suffered and as a result, are questioning the value of a long, complex supply chain with so many inherent vulnerabilities. What has been the beacon of hope in all of this? Many are turning to nearshoring as a solution to the problems of a hyper-globalized production chain.

Hyper globalization had some unforeseen problems

The problem with the globalization movement that took off in the late 1990s was that its proponents were focused on creating short term value without considering the long-term effects on the company, its employees, and the resilience of both. Globalization was about creating multinational corporations that could leverage cheap labor and raise shareholder value.

In many cases, companies implemented short-term cost-cutting “efficiencies” that later turned out to be more problematic than many had expected. As supply and production chains went global, new problems arose. In some instances, cheap parts may have reduced the cost of goods sold but damaged the reputation of the brands that used those parts in their products. Another example: outsourced call centers helped the bottom line but cultural differences and accents alienated customers.

In IT, outsourced services may cost less when they are based in developing countries that pay low wages, but generally, especially in this field, qualified professionals get paid better. When we think only in terms of securing low prices, the most likely result is that we end up with low-quality products. Besides the low wages, we have the fact that being in opposite time zones can disrupt communications and cultural differences can complicate collaboration and block innovation. As a result, nearshoring in countries/regions more culturally-related and with qualified and very well-trained professionals has gained momentum in multiple industries, from IT to fashion to manufacturing.

There is an inherent wisdom in building long-term value

Since the heyday of globalization, leaders have learned the value of creating partnerships, where both parties are vested in the success of the product. They are more likely to think in terms of creating long term value through carefully cultivated partnerships. “Building value” is more often a topic of discussion in the C-Suite.

Supply chains are no longer all about optimizing labor costs. Your supply chain, whether it is a digital supply chain or a physical one full of logistics complexities, should be resilient and it exists within a complex, unique ecosystem that is your company.

nearshore: People are calling for new production and supply chains

Globalization does have its benefits, such as cooperation across national borders on matters that affect us all: climate change, human rights, and more. But when globalization is leveraged simply for the pursuit of profit and to the detriment of quality, customer satisfaction, and long-term business strategy, there is a downside to globalization.

The pandemic does not usher in the end of globalization. Cross-border economic integration will still be around. But the shift is away from global alliances toward regional and local partnerships that create value in a more sustainable way than before. Companies that build resilience and flexibility into their supply chains are poised to reap long-term benefits as they protect themselves against potential future global disruptions that negatively impact production.

The next phase of globalization will be a more selective version of international cooperation. Regional engagement and localized interdependence will be the key to building resilience and achieving the flexibility that has been so lacking in the current system. Yes, economic globalization can be a positive movement — but this time around, it is more localized, centered on regions that have similar cultures and time zones rather than spanning too far along the lines of longitude.

Digital transformation and digitalization of business are the keys to making it all work. With faster networks, better digital tools, a stronger commitment to building customer relationships, and more emphasis on innovation and flexibility, digital transformation is the key to unlocking this new form of globalization.

We just needed a little push from the pandemic to accelerate transformation and remind us that sometimes, it is the human relationships that matter the most, even in business.